Meandering on the Rhine 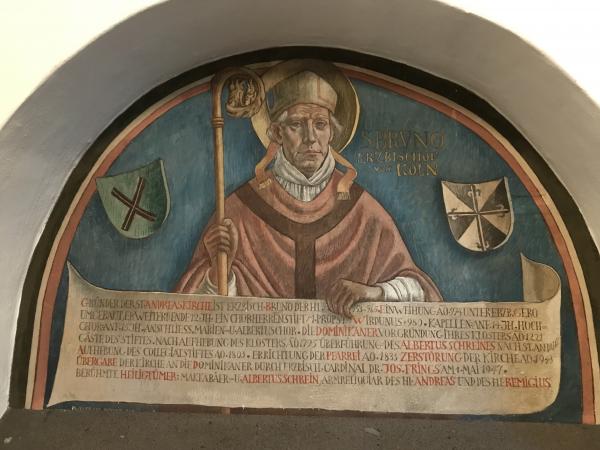 If all goes well, by the time you read this, I will be home in bed after a long flight back from Munich to Atlanta.  But that is not where I am right now.  Right now I am on a train to Zurich and then onward to Germany in search of that tiny town of Oberammergau.  Everything that has been said about Swiss trains is totally true.  You can set your watch by them.  They tell me that the German trains have lots of problems and sometimes are very late.  I ask them what “late” means in Germany and they say.  “Like sometimes up to eight minutes.”  Good news.  I think we will be okay.

There have been too many good and beautiful things about this European adventure to count and I suspect you are going to have to hear me talk about things I learned on this trip for a long time to come.  Today let me just start with the gift it has been getting to wander around the Rhine with the saints.  My husband thinks that I am talking about him.  Naturally.  But there were others further along in the canonization process.  Quite by surprise—since I neglected to look closely at a map before leaving—I found myself walking in the footsteps of some of my favorite church history figures during this trip including:

Maybe someday I’ll get around to working on a set of prayers for administrators that includes Albert and Hildegard… but for now I’ve already got a nice option for remembering Bruno.  If you are ever looking for a prayer service to lead something for the administrative team at your school or parish, diocesan office or religious community, check out this free download that accompanies Redeeming Administration.

Meanwhile, after I recover from the jet lag, I anticipate my next post will be about some crazy artwork I saw along the Rhine related to the none other than the Holy Spirit.  Stay tuned.  Pentecost is around the corner now!