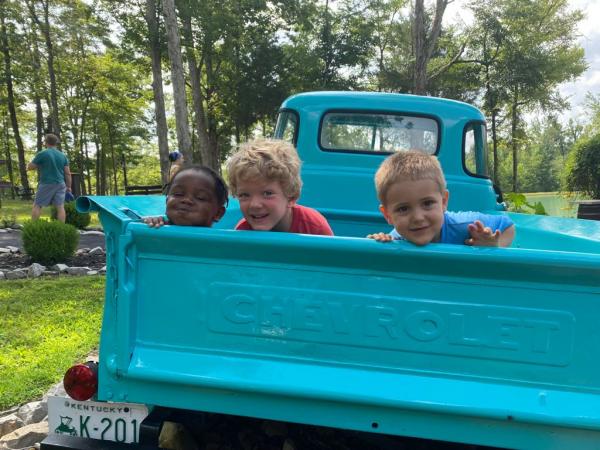 With the new school year beginning and concerns for the safety of our children rising, I’ve found myself pondering again that beautiful passage from Mark 9:33-37 that will once again appear as our Sunday Gospel reading in just a couple of weeks from now:

They came to Capernaum and, once inside the house,
he began to ask them,
“What were you arguing about on the way?”
But they remained silent.
They had been discussing among themselves on the way
who was the greatest.
Then he sat down, called the Twelve, and said to them,
“If anyone wishes to be first,
he shall be the last of all and the servant of all.”
Taking a child, he placed it in their midst,
and putting his arms around it, he said to them,
“Whoever receives one child such as this in my name, receives me;
and whoever receives me,
receives not me but the One who sent me.”

And this is what strikes me:

Here we are in 2021… almost two thousand years since Jesus and his disciples were meandering the windy backroads of Galilee… and yet their topic of conversation feels like it could have been a panel discussion on last night’s news:  What’s it mean to be “great”?

The English translation of the passage makes it sound as if the disciples were arguing amongst themselves here about which disciple was the greatest of all, but the original Greek is a whole lot more ambiguous than that, in part because there is no verb.  Literally, it just says “Who greatness?”  or “What greatness?”

If we were able to travel back in time and be part of that conversation with Peter and James and John and the whole crew, it’s interesting to think what we might have to contribute to the discussion.  As 21st century Americans, who do we tend to think of as “great”?  What do we see as making our country “great”?   When we look around us, what kinds of characteristics or personality traits do we see the label “greatness” being attached to?

Would our answers really be all that different than the ones Jesus’ disciples were tossing around as they walked through the door to the house in Capernaum?  Answers probably having to do with…

Competition.  Being better than.

Being bigger than life.

No, I’m thinking the conversation about greatness now looks pretty darn similar to the conversation that would have been happening then.  Kind of embarrassing to admit how little has changed over two millennia, isn’t it?

And so now, as then, let’s pay attention to how Jesus responds to all our talk about greatness.  Let’s watch as Jesus inserts into the middle of the conversation a child.

Where did the original child come from?  I have no idea.  The conversation takes place in Capernaum where a couple of Jesus’ disciples hailed from.  Was it one of Peter or Andrew’s little ones?  How old was the child?  Was the child a girl or boy? The English translation that we have  says, “It” which seems a bit problematic.  But perhaps the lack of specificity is simply meant to indicate that it doesn’t matter.  Any child will do – from then or from now.

See how Jesus picks the child up, wraps his arms around the child, and then puts the child right in the middle of all our adult meanderings and says, “Look here.  Whoever receives a child like this…”

What picture comes to mind here for you?  I am imagining this child on Jesus’ lap.  Almost like he made a nest there for this little one.  A place to rest.  A place to lodge for a while. “Whoever ‘holds’ a child like this, ‘holds’ me… and whoever ‘holds’ me, ‘holds’ the one who sent me… ‘holds’ God.”

“If you want to know what greatness is really all about, create space in your lap / in your life for little people to nest.”

And we might take Jesus’ teaching at the most literal of levels: The one who is great is the one who welcomes infants, toddlers into their world and makes room for another at the table.  Yes.  And, Jesus also seems to have understood the child as a parable, as a sign of the anawim – all of the “little ones of the earth.”  Which might include the poor, the refugee, the outcast, the one without a family to nest in, anyone on the edges of the scene of society.   Our greatness—at the individual and communal and national levels—is defined by the way we “hold” and reverence the small, giving them a space in the center.

In this time of pandemic surge affecting the young as well as the old, as people seek shelter from Hurricane Ida in Louisiana and the wildfires of California, and refugees from the Taliban in Afghanistan arrive within our border, let’s pray that we might find ways to ‘hold’ the little ones in our midst.  For when we hold them, we hold Jesus, and when we hold Jesus, we hold the One Who Sent Him.  We welcome our God.

ICMYI – I have a new FREE discussion guide out on #Rules_of_Engagement intended particularly for Catholic school parents.  Check it out by scrolling to the bottom of this Ave Maria website page.