The Art of Taking Leave 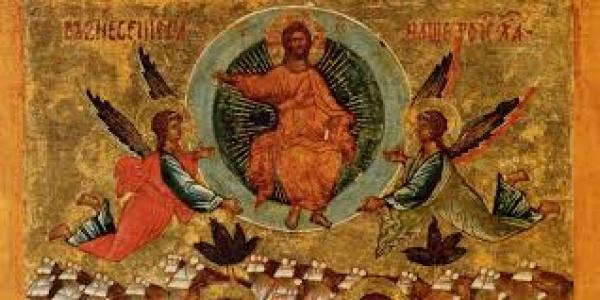 Depending on how you look at it, this posting is either one day late or two days early.  But either way, it never hurts at this time of year to sit for a bit with the mystery of the Ascension.  I’ve been pondering it a good deal of late because I am preaching for the Sinsinawa Dominican community on Sunday, and in preparation realized that I don’t think I’ve ever really understood this feast and why it has meant so much to Christians from the earliest centuries of the Church. (Augustine talks about it already in the 5th century and indicates that even then the feast had already been celebrated for generations.)  What does this feast so deeply speak to in human experience?

In light of this past year, I wonder if it doesn’t have something to do with the art of leave-taking and embracing a different sort of future.  So many things we’ve said good-bye to these last months.  So many people we are missing.  So many new and different ways of being together.  I am especially grateful for the poetry of Jan Richardson around this feast—the way she illumines the deeply intertwined mysteries of leaving and blessing:

Blessing the Distance
For Ascension Day

It is a mystery to me
how as the distance
between us grows,
the larger this blessing
becomes,

as if the shape of it
depends on absence,
as if it finds its form
not by what
it can cling to
but by the space
that arcs
between us.

As this blessing
makes its way,
first it will cease
to measure itself
by time.

Then it will release
how attached it has become
to this place
where we have lived,
where we have learned
to know one another
in proximity and
presence.

Next this blessing
will abandon
the patterns
in which it moved,
the habits that helped it
recognize itself,
the familiar pathways
it traced.

Finally this blessing
will touch its fingers
to your brow,
your eyes,
your mouth;
it will hold
your beloved face
in both its hands,

and then
it will let you go;
it will loose you
into your life;
it will leave
each hindering thing

For more on this theme, I can’t speak highly enough about her reflections on this feast at paintedprayerbook.com