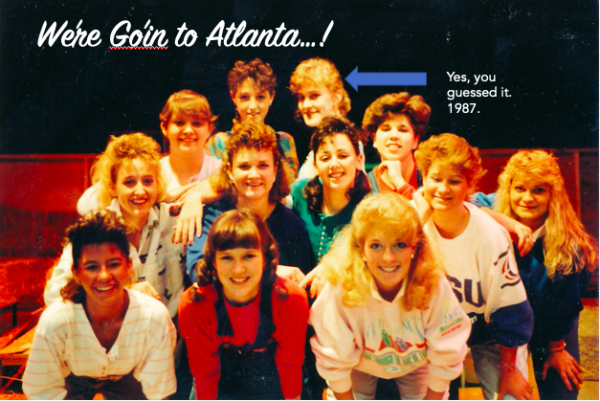 When I was a senior in high school, I starred as “Thad” in a rousing rendition of the 1980’s musical Cotton Patch Gospel.  Didn’t know Thad was one of Jesus’ disciples?  Maybe didn’t even know Cotton Patch Gospel was a thing?  That’s all beside the point.  The point is: The first act ends with a peppy tune called, “We’re Go’in to Atlanta for the Hoedown.”  It’s a bit of an ear worm. Thirty years later, I still find myself humming it occasionally… but never more so than this past week.  Yup, the Garridos are go'in to Atlanta.

Surprise!  Didn’t see that coming, did you?  Neither did we exactly.  My husband Mike had been approached by a hospital some time ago, but there have been so many ups and down in health care over the past year, the conversation would wax and wane.  And then, earlier this week, the hospital CEO “made him an offer he couldn’t refuse”. This weekend he’s up in Atlanta looking for a place to live.  Which leads me to the second, more melancholic, half of the Cotton Patch song: “What Does Atlanta Mean to Me?”  (I’m making you want to listen to the whole sound track, aren’t I?)

It’s a bit sad for me.  I love winter in Miami.  And I will miss my Dominican brothers and community at Barry U.  I will miss the sunflower vendor at the end of my street, amazing Latin American food, and the ocean.  Oh, the ocean.  Sigh.  But I am also thrilled about the prospect of being closer to my Catechesis of the Good Shepherd community and old friends from Sierra Leone and grad school.  Excited to see spring and fall again.  To be only a day’s drive from St. Louis.  The prospect of more direct flights.

So, pray for Mike and I in the weeks ahead.  Packing, unpacking, registering cars, getting new drivers’ licenses, rerouting mail, figuring out internet, changing addresses.  All that stuff is my least favorite stuff to do in the world.  But I suppose some of the “administration” that needs to be “redeemed” in the world is administration of the home front.  And here we go!

Meanwhile, check out my newest open enrollment opportunity for the New Year!  I’m partnering with the Mandorla Center to offer three evenings in January on what our Christian faith asks of us regarding the doing of truth in the modern world.  Each session will build on the last.  It’s going to be a pleasantly-sized group of people from all over with lots of chance for interaction with each other!  Would love for you to be part of it!