John's Last Week in the Spotlight 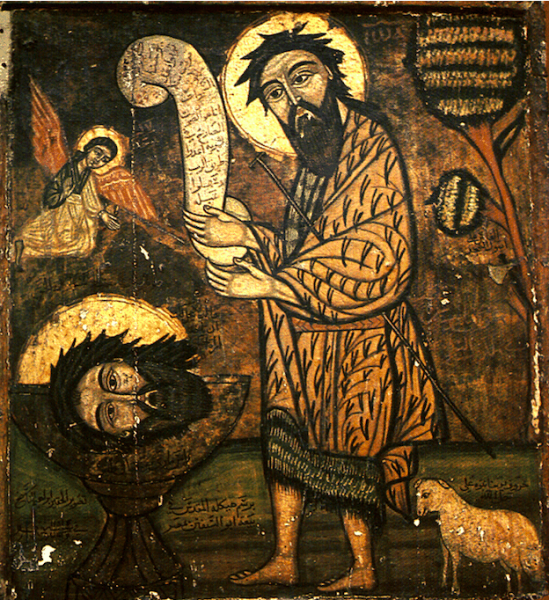 This year with Christmas being on a Sunday (to the joy of liturgists and choir directors everywhere), the church calendar goes a bit wonky and the feast of the Baptism of the Lord got bumped to a Monday, but the lectionary tries to make it up to John the Baptist this coming Sunday by giving him center stage again.

Praying with this coming Sunday’s gospel from John 1:29-34, I’ve been thinking of the whole last eight weeks that opened the new liturgical year as the opening act of a magnificent drama.  The spotlight turned on back in early December with John the Baptist as the lone voice on stage shouting “Repent” and “Prepare the way of the Lord.”

His deep voice bellowing drew a crowd and soon there were a whole cast of characters on stage—Mary and Joseph, Gabriel, Elizabeth and Zechariah, shepherds and magi, the holy innocents, Herod.  Captivating, fast moving scenes.  Saints Stephen Protomartyr and Lucy with her crown of candles did cameos.  But now the curtain has closed.  Behind it, there are people dressed in black moving around the furniture, getting the set ready for Act 2.  And the only person left out front of the curtain, is the one actor who began it all.  John the Baptist.  In his camel skin and leather belt still.  Once again alone.  Speaking now, I am thinking, in a softer voice. It’s unclear who he is talking to.  Maybe it is only to himself.  A soliloquy.

After this short monologue, John, too, will begin to fade from the drama.  The following Sunday, we’ll hear that he has been arrested.  Soon—spoiler alert—he will be dead.  But for one more brief moment, he holds center stage, the spotlight is on him.

But in his last appearance on stage, that is not what he talks about.  He uses his moment of glory, to point to someone else. Jesus – the Lamb of God, the one who ranks ahead of him, who existed before him, who has been filled with the Spirit, who is the Son of God.

I’ve found myself wondering when John became aware that the plot line of the drama of salvation was not going to revolve around him, that he was the supporting actor and not the lead role.  And I wonder how he felt about that:  Did he feel unappreciated?  Competitive?  Relieved?  He was drawing great crowds preaching repentance, the turning away from sin.  How did it feel when God revealed to him someone else would be the one “who takes away the sin of the world”?

And I wonder what it was like when he found out that it was Jesus who had been cast in the lead role… someone John says (at least in this gospel) that he did not know, but whom many scripture scholars think that for a short time might have been one of John’s disciples.  Was it a flash of insight on John’s part?  Was it something that slowly dawned on him?  Is that what is happening right in this moment that John is on stage this Sunday?  Maybe when he says he did not know Jesus, John means that he did not know who Jesus really was before this very moment.  John is seeing Jesus walk toward him from the distance and his eyes are widening that this is the one that his whole life has been pointing toward.  What is the tone of his voice as he testifies here: awe, surprise, ah-ha, shock, contentment?

I think about these things because I suspect that at some point I can expect that I will be asked to play the role of John the Baptist in the story… and maybe even today.  Maybe you’ve had the same intuition.  I suspect there comes a moment in each of our lives where events will transpire to reveal to us that we are not the center of the salvation’s story.

I mean, we already know that, right?  But then there are moments when we KNOW it, not just at a head level, but deep in the gut.  When someone gets a promotion we did not.  When one of our students outshines us.  When someone comes up with a fix we didn’t imagine. Takes a different approach that ends up being more successful.

I think the last couple years have been rather difficult ones for those of us who grew up thinking of ourselves a prophets—edgy, challenging the status quo.  Working for a better, more just world. Decked out in camel skins. Introducing the world to the health benefits of locusts.  To then find out that that world is not in our lifetimes.  That to be prophetic actually means to point at a future that is still not our own and will never be our own.

And probably you, like I, actually have a wide range of feelings about this dawning awareness, rather than just one.  Some disappointment.  Some sense of being unappreciated.  Some sense of being kept in the shadow.  Yet also some relief—Oh, thank God, I am not the one who has to take away the sin of the world.  Some joy at watching another come into the limelight and do amazing things.  Awe at seeing how the Spirit is at work in others.  We can feel our hearts opening:  Oh, God is actually present here, too.  My life still has meaning and purpose, but maybe just not in the way I thought.

During this week of transition between the seasons.  As the set is changing behind the curtain and new scenery is being rolled into place, perhaps you and I can spend one last week with John the Baptist, paying close attention to how he plays his role in the drama of salvation…which really is the drama of life itself.   In our prayer, we can ponder where we see the Spirit coming to rest in our world beyond ourselves and talk to God about how that feels.  In our action, we can seek to share the spotlight with others, pointing to a future that will always be beyond us.  A future in which Christ always plays the lead.

A closing gem from the wonderful poet and artist Jan Richardson that helped to inspire this reflection:

The Prayer Book of John the Baptist

Is written on
locusts’ wings.

Is stained with
wild honey.

Is buckled by
baptismal waters.

Is mostly
pages of wilderness
where prayers are formed
not from what is present
but from what has been
worn away.

Is inscribed
with an ancient path.

Is falling open
toward the light.