Losing one's head for the sake of integrity 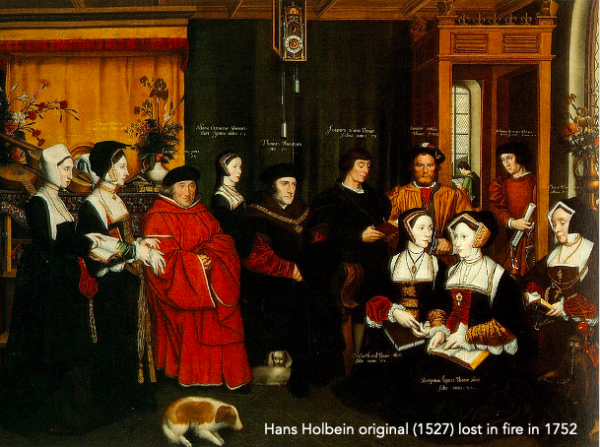 Today marks the feast of St. Thomas More--one of the saints that I profile in Redeeming Administration—and, gosh, I’ve been thinking about him a lot lately.

Thomas was a married man.  In the family portrait painted at his request by Hans Holbein in 1527 (copy featured above) you see him surrounded by his wife Alice and grown children but also an array of books and musical instruments and odd pets.  He was known to entertain dinner guests by introducing them to his monkey (pictured along the hem of his wife’s dress), as well as his ferret, weasel, and fox.  When I look at this painting, I am struck: Here is a man fully ensconced in the chaos of real life.

At varying points in his career, Thomas served as a lawyer, a member of the British Parliament, chief legal counsel to the sheriff of London, and commissioner of sewers.  He had a reputation for fairness and honesty, and was known to be deeply committed to the rule of law.  In 1518, he agreed to work in King Henry VIII’s royal service.  Thomas’ family and the Henry’s family enjoyed a longstanding friendship so Thomas had known Henry since childhood, but he had his reservations about working directly for him.  Thomas suspected Henry harbored a deep-seated lust for power that could come into conflict with his own commitment to rule of low.  At one point, in talking to a fellow member of the King’s inner circle, Thomas advised, “[I]n the counsel you give His Grace, ever tell him what he ought to do, but never what he is able to do.”  Unfortunately, Henry proved more interested in testing the limits of what he was able to do.

Thomas’ relationship with Henry was severely tested when Henry decided to dissolve his 20 year marriage to Catherine of Aragon because it had born no heir for the throne. Unable to acquire an annulment from the pope, Henry bullied the bishops and Parliament to twist English law to conform to his personal wishes, declaring himself not only head of the state of England, but also head of its church.  Thomas was Lord Chancellor of England at the time Henry decided to break with Rome, a position of influence second only to the king.  Thomas’ initial approach to the dilemma was to remain as a trusted and honest counselor to the king, consistent with his longstanding commitment to doing the best one can in the middle of the messiness of the world.  As he stated at one point, “You must not abandon the ship in a storm because you cannot control the winds” but rather attempt to make things “as little bad as you can.”

After three years as Chancellor, however, Thomas felt as if he could no longer remain in the role with integrity.  Out of respect for the king’s office and for the safety of his family, Thomas committed to remain silent concerning his personal opinions on Henry’s actions.  More knew that, by English law, silence implied consent, and that by refusing to speak on the matter, he was not doing anything that could be legally construed as treasonous. Unfortunately, Henry was not content with More’s silence.  In 1534, Henry mandated that More take an oath accepting the change of succession that would come with offspring born of Henry’s new marriage to Anne Boleyn.  When More would not, Henry had him imprisoned.  Various family members and friends from his past visited him and tried to persuade him to take the oath, but Thomas would not say anything he did not believe true.

Finally, Henry’s collaborators arranged to have Richard Rich – a young lawyer interested in elevating his career – perjure himself on the witness stand at More’s trial, claiming that Thomas had explicitly denied Parliament’s right to name Henry head of the Church of England.  More was found guilty and sentenced to death.  He was beheaded on July 6, 1535.

I’ve thought a lot about Thomas reading the daily news about the January 6th hearings.  I’m listening for all the different ways that people in our own U.S. government managed working in the Trump White House, especially following the loss of the presidential election.  Some trying to not abandon the ship and make things “as little bad” as they could.  Some remaining silent in the face of egregious lies, choosing not to take a stand… maybe for the safety of their families and their futures.  Some finally speaking truthfully now.  Some apparently still taking Richard Rich as their life model.

And I have empathy for many of them because as someone who’s been involved in administration, I know that the choices one faces in relation to power are often very messy.  Lots of us wonder when we see poor—even evil—decisions being made whether we should go or whether we should stay and try and mitigate the bad effects.  If anyone has perfectly figured out when to speak and when to remain silent, please let me know.  Thomas’ life highlights the undesirable paradox that in many situations the way to be most loyal to a leader is to tell the truth the leader doesn’t want to hear.  And, the way to possess the greatest influence is to be willing to sacrifice all influence for the sake of living with integrity.

If you are looking for a prayer service to use with your community today, please download the free prayer guide on Ave Maria Press’ website and check out the prayer service for the feast of St. Thomas More on June 22.   Perhaps this year we could pray it in a particular way for all those involved in the January 6th hearings.

Meanwhile, in closing, one of my favorite quotes from Thomas More that I try to live by (some days with more success than others): “Happy is the person who can distinguish between a rock and a mountain, it avoids so many inconveniences."